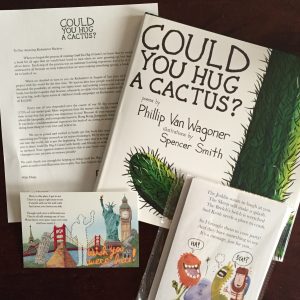 We’ll have these books heading out very soon, just wanted to give you a heads up on what that package is going to look like!

We can’t wait to get these out of our office and into your hands! The packing party is this weekend and we’ll be sending them out early next week!

Wow. It’s been a long time coming but they’re here! A very nice guy named Daniel just drove away and left these four palettes of books behind! The best part? They have my book inside! “Could You Hug a Cactus?” is real!

So, I know you’re wondering how I celebrated… I cut the plastic off and proceeded to move 166 boxes of 15 books each up to the fifth floor of a storage unit! Don’t worry, they won’t be there long! (Right?) 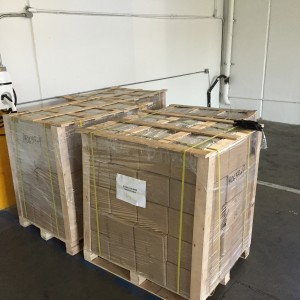 This is really an awesome moment in life, and something that wouldn’t be possible without a whole lot of people believing in me (or by proxy of Spencer, I’m not splitting hairs here). Now we get to mail these suckers out. Big packing party is happening on Saturday! Anyone want to help?

Wow! The Long Beach Comic Expo was an absolute blast. The opportunity to share our book and our cactus with everyone was amazing, and everyone we met was so incredibly cool. 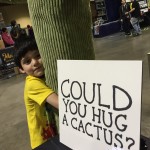 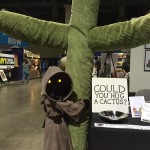 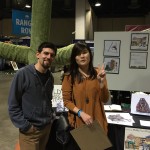 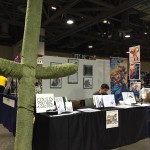 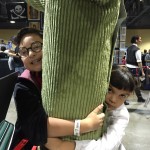 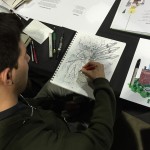 Thank you so much to everyone who stopped by the table to chat, take a look at the book, and hug the cactus!

Now: the exterior and the grand reveal!

So, if you’ve been with us from the beginning you know that we built the skeleton from PVC pipe (stabilized with pvc glue and bolts, and utilizing screw caps to give us the ability to disassemble it for storage and transport). We then duct taped pool noodles to the pipe, wrapped that in batting, capped the ends with foam domes, and sewed the entire thing in a stretchable white cotton/poly blend to make sure it keeps its shape. 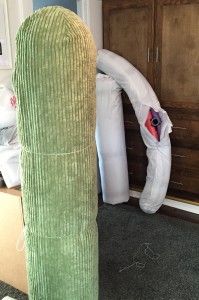 The top of the cactus looks pretty good! This is only partially stitched at this time, but getting the dome right at the top was paramount, so we felt pretty good…

The most daunting piece of the entire project is upon us: sewing the exterior fabric. I mean, people actually SEE this part) Now, if the fabric store had carried 6 yards of this upholstery fabric, we would have bought it. We may have bought 6 1/2 and we bought six yards of everything else. Unfortunately, only 5 2/3 yards was available, so we knew we didn’t have any extra to mess around with. We had to stitch it right the first time.

Also, I had this crazy idea that I wanted the front of the cactus to be one long, unbroken piece of fabric so it would look natural, even though the cactus has to be able to be disassembled. So our plan was this: we sew up the entire top half of the cactus in the green upholstery fabric with enough remaining at the bottom to cover the entire length of the cactus. Then we cut small circles out of this portion to wrap around the arms, and sew velcro down the back. During transport, the bottom will be without the green upholstery and the top will have a skirt. Make sense? If not, don’t worry, it didn’t make sense to anyone else at first either…

After sewing the top, we assembled the thing out back, cut it where it wrapped around the arms, and marked where the velcro needed to be attached. That night, Kelly worked on sewing adhesive velcro tape (brutal) while Spencer and I sewed up the arms. The next day, after some last minute tweaks to the batting, and the velcro – we were ready to assemble the cactus! 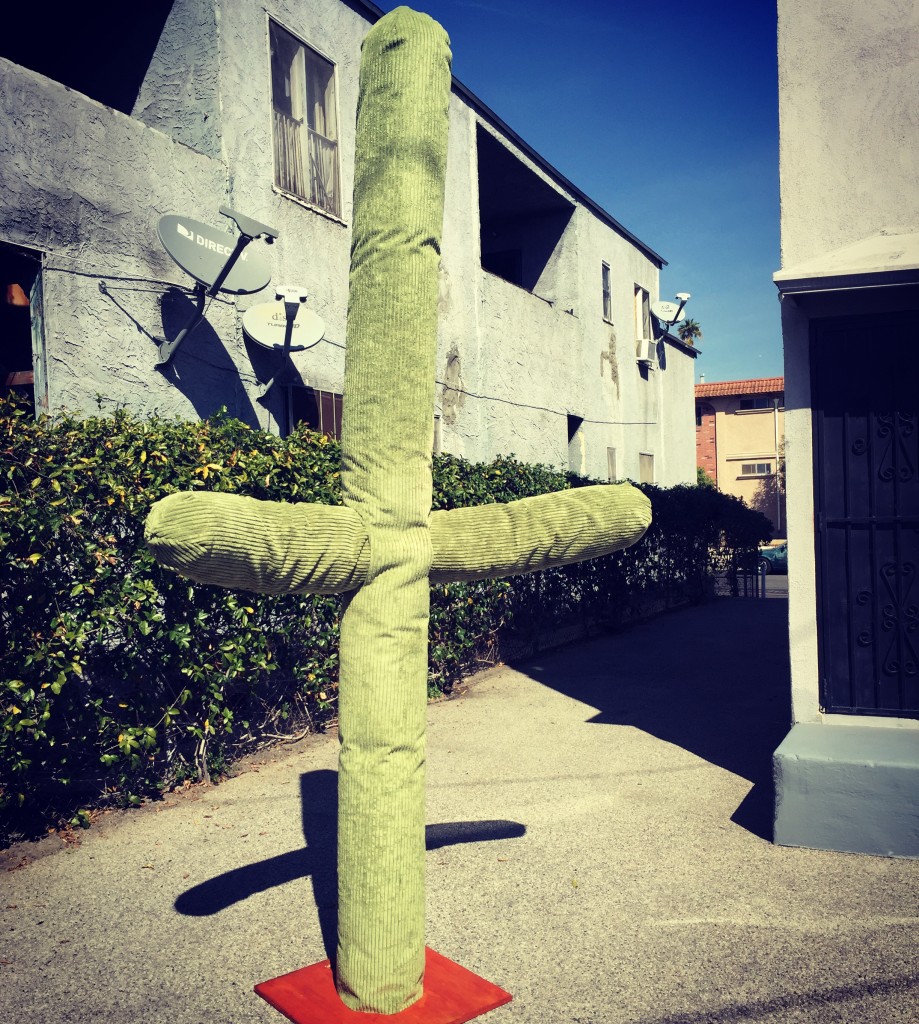 Check out this fine, ultra-huggable speciman! We were so relieved once it all came together and it looks amazing!!

Bringing this entire crazy project together was really special. A lot of work, a lot of attention to details we didn’t even consider at first, and a really rewarding team experience – kind of a mini-version of the entire book, honestly. Being able to make our mark at the Long Beach Comic Expo is going to be great, but having a crazy idea and bringing it to fruition is its own reward.

First, we added styrofoam domes (from any craft supply store, but in our case, Michaels) to the top of the cactus and the ends of the arms, in order to get the nice rounded shape. Then we used duct tape to wrap the cactus in batting. Since the bottom half was a little thicker than the top, we double wrapped the top to ensure a more even shape throughout. 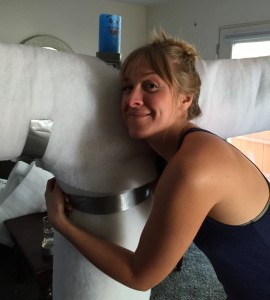 Kelly hanging out with our short-lived friend, Huggy! You can see the batting taped around the arms and bottom here.

Then… a lot of sewing. We knew it was coming, and we thought we were prepared, but we hand-stitched a 10′ cactus with a 7′ wingspan – twice. First, the interior layer. Like I mentioned in the previous post, we picked up a cotton/poly blend fabric for the interior in an effort to keep the cactus’ shape throughout (what is hopefully) many rounds of assembly and disassembly. You don’t build one of these for a one-time use.

After the white interior fabric was sewed, we then moved on to the most daunting task of the project – the exterior…

Next up – the exterior

But first, a quick aside. It didn’t matter what we were ready for, 3 full days of sewing by me and multiple nights of help from Kelly and Spencer and we weren’t finished. We still wouldn’t be finished until the night before the expo… Our advice is, if you know anyone with a sewing machine, start bringing them baked goods now. You never know when they might save you a week of your life… 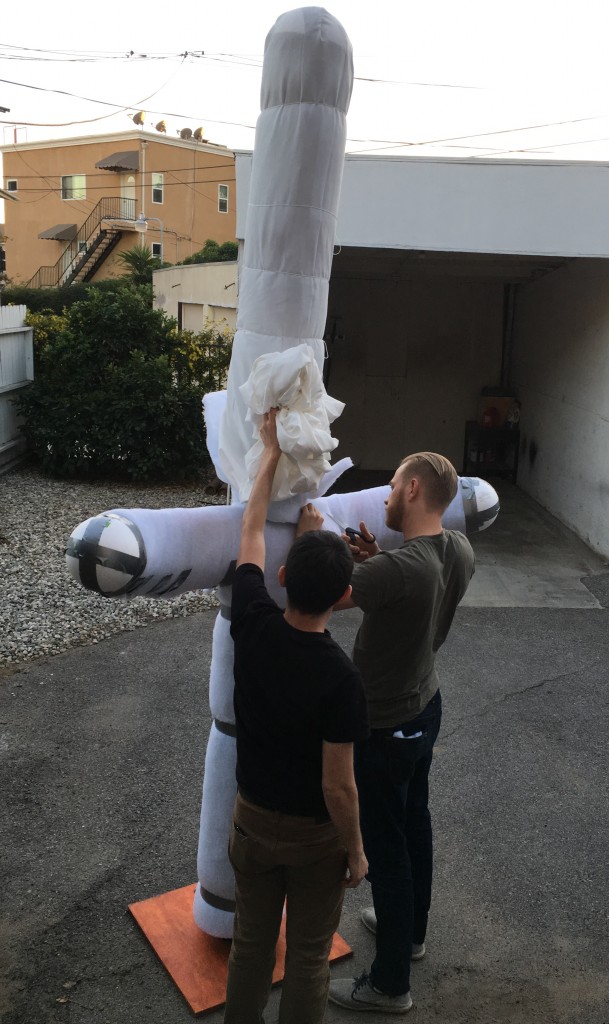 Once the batting, styrofoam domes, and interior fabric started to come together – the shape really took, well, shape…

Okay, so first things first, today was one of those days where Kelly absolutely floored me with her generosity and love, but in a totally different way than a standard Valentines’ day gift. Instead of going out to a dinner, a movie, giving each other cards – she introduced me to the fashion district downtown and helped find the needed fabric to make this cactus come together. Not everyone would be generous enough to spend Valentines’ Day working on a project this big, tedious, and messy but she did and it truly meant the world to me. 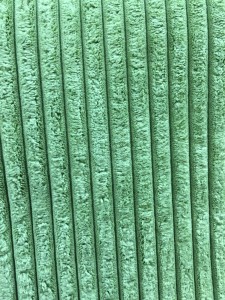 This upholstery fabric would probably look terrible anywhere else, but for a huggable cactus? PERFECT.

So: Fashion District!! I had never been down to the fashion district in LA before but it’s a lot of fun. There’s an unbelievable number of shops selling countless fabrics by the yard. We ended up having the most success at Michael Levine. We picked up batting (the stuff you’d put inside a pillow or teddy bear), a stretchable cotton/poly blend for the interior fabric, and the most magical find of all: an upholstery fabric that could not be more perfect. 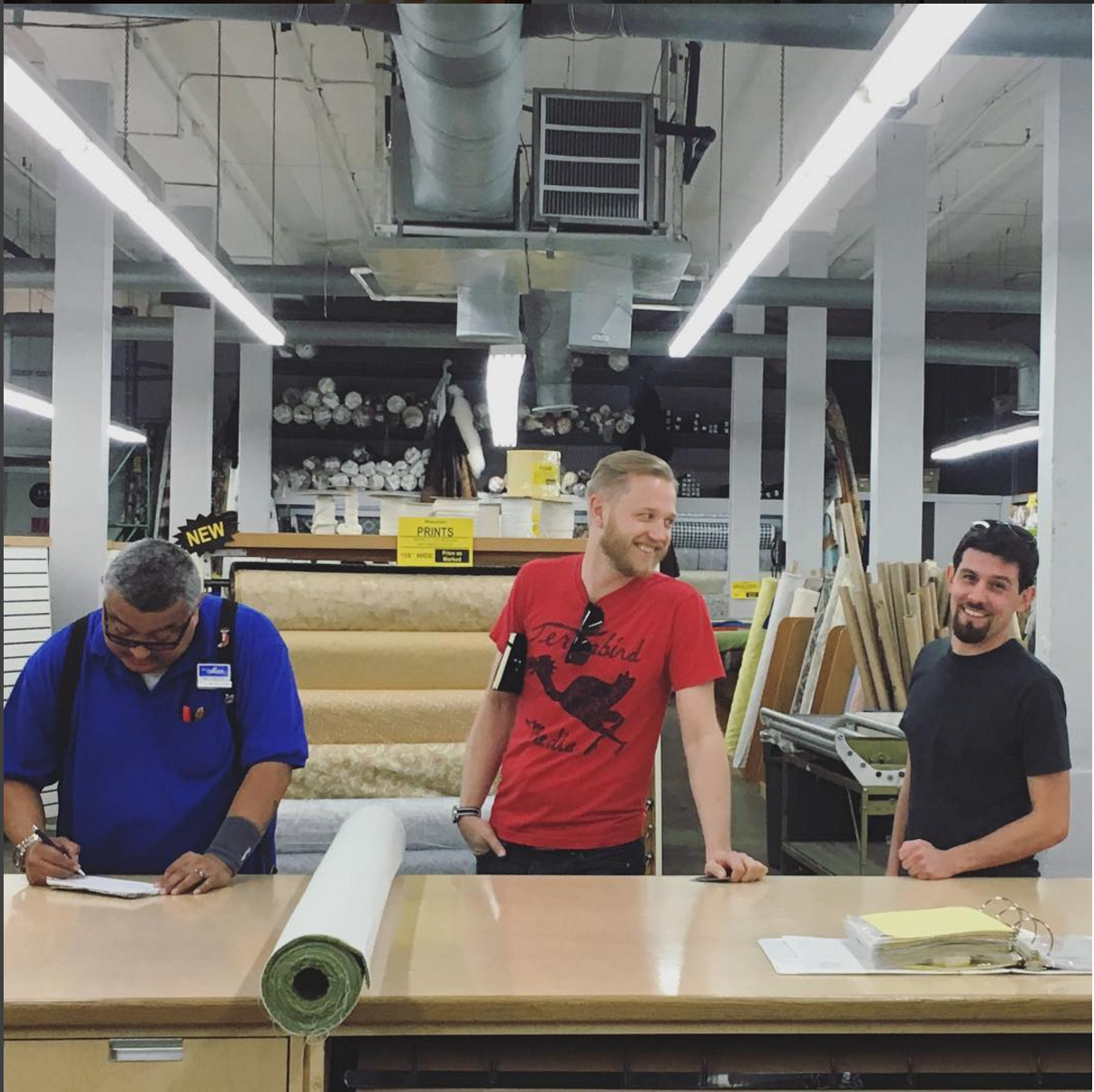 Yeah, we bought them out! (This awesome picture taken by my awesome fiancée – @kellyismyname)

With the shopping complete, the next few days are going to involve a LOT of sewing…

Next up: a LOT of sewing…

Alright! So we worked on the base (staining, sanding, adding a handle, bolting, and leveling the bolts) while waiting for these guys to arrive:

A giant box of pool noodles!

Once we had the pool noodles on hand, we used a lot of duct tape and made sure to tape individual noodles directly to the pvc pipe, so we can twist the entire piece as a single unit. Since the piece is going to have to disassemble to be transportable, we’re using male/female screw-ends on each of our major sections so the cactus can be broken down easily.

We ended up working with a straight top, (the bent top you see below was an experiment we decided against). Also, at the stage you see here, the cactus is 12 feet tall. Eventually, the cactus was trimmed down to 10 ft to accommodate the fabric.

Next up: the fabric!

So, the Long Beach Comic Expo is coming up and Spencer and I will be there February 20th and 21st. We’re really looking forward to the experience and hoping against hope that the books have arrived in time for the expo. If not, we’ll sell prints and get creative with getting the word out about the book. Well, really, we’re going to get creative either way.

We’ve decided that in order to get some attention while we’re there, and have something else awesome to talk about, we’re building a cactus. A 10’5″ huggable cactus.

Now, neither Spencer and I are professional builders, but we do like making cool things and we’re relatively handy. At least, enough so that we’re willing to undertake the project.

The materials you see used here to build our skeleton are pretty basic. I’ve got some 2″ schedule PVC pipe – both a 10′ straight pipe and a large curved for the arms. I’ve got a 2″ 4-way connector, a 2″ to 4″ adapter that I’m using to connect to a 4″ debris cap that happens to be very sturdy and have 8 slots to accommodate 1/4″ bolts. The bolts are connected to the bottom of our 2′ x 2′ plywood base with standard 1/4″ nuts.

The bolts will be cut to ensure that the base sits flat on the ground.

Coming up next: we need to fill him out… 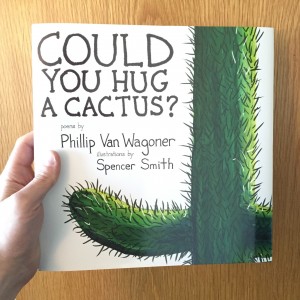 So, getting this guy in the mail was incredible. Spencer and I have worked so hard to make Could You Hug A Cactus? a reality, and finally getting to hold it is pretty special. The fabric-wrapped cover is amazing, the art looks amazing on the page, and we are really, really proud.

Something funny happened after I held the advance copy for a few minutes. I slowly realized that I have a whole lot more of these coming. Sure, I’ve had visions of signing copies for people, reading it to groups of kids in school, and even trying to sell them to local stores – but I never envisioned the process of moving a pallet of books to a local storage unit and writing checks to pay the storage fees indefinitely until they’re gone. I never thought much about what kind of table-covering I should buy to dress a 8-ft table for an expo or how expensive packing materials become when you’re buying them by the thousands. You know, the real stuff…

It’s exciting, and frightening, but mostly exciting… I think…

Really though, as I sit with this nervousness a little, the reality of what kind of efforts this undertaking will require, I’m more excited. All of the nerve-wracking, laborious, and menial work that will go into making my new endeavor a reality are precisely what make it real. And that is what is exciting.

I’m anxious about my new path. I’m excited to put in the real effort, and I have a feeling  in the pit of my gut that this is what I should be doing. Thank you again to everyone who believed that this was possible, to all the wonderful folks who helped make it happen, and to all of the people I’ll meet in the near future that will help make it real. 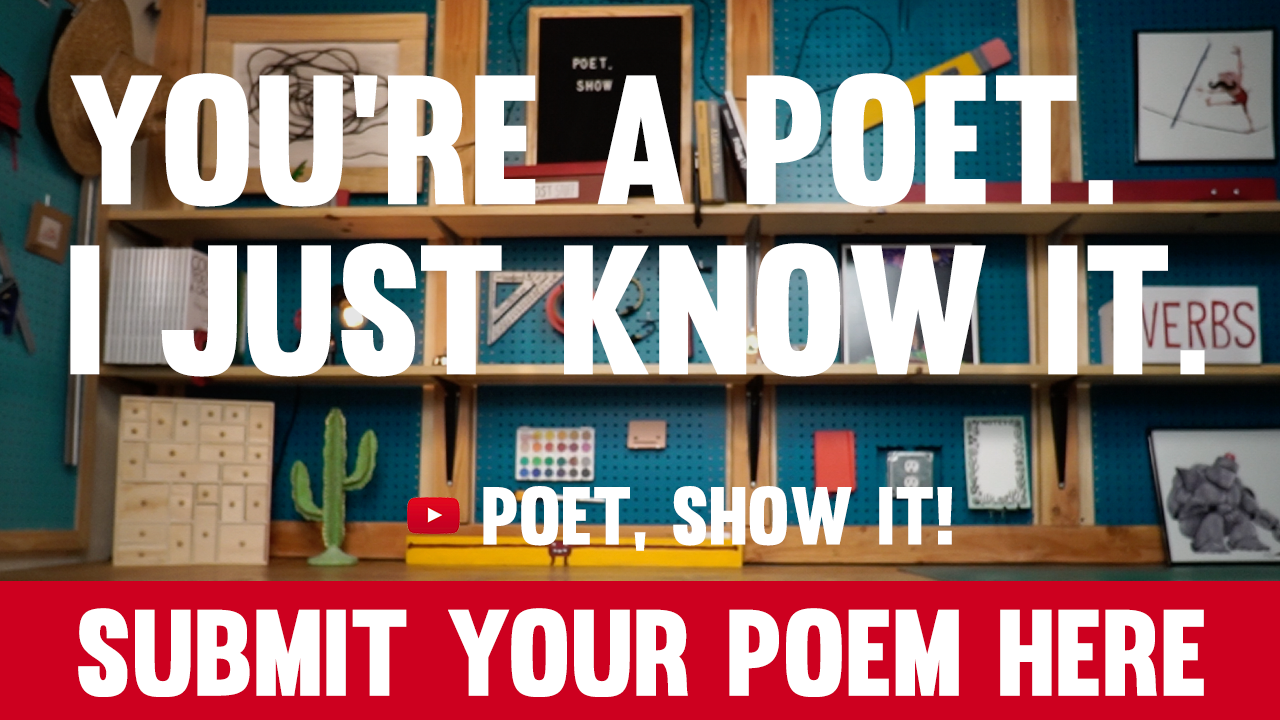